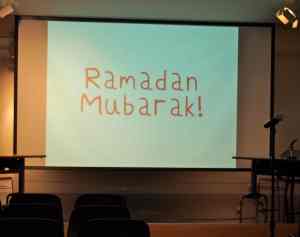 Last Friday, August 2nd, I’m Your Neighbor Portland hosted its largest event yet, “Ramadan Mubarak: A Holiday Celebration and Education for Families of All Faiths.” Over two hundred people attended throughout the evening, including members from the Muslim community, Portland residents and those passing through on their First Friday Art Walk circuit.

Many attendees waited to be decorated in beautiful henna designs

Attendees could have their names written in Arabic when they first entered. The Portland Library had a display of their collection on Islam next to the I’m Your Neighbor Portland bookshelf, and PPL staff were on hand for anyone who wanted to check out books. The henna station was extremely popular and volunteers were kept busy as a constant stream of people were lined up waiting to have their hands painted with beautiful designs. Peaks Island author and illustrator Anne Sibley O’Brien had her art work from Moon Watchers on display to show the process of her research and early sketches for the illustrations. There was also a prayer rug room set up with a video of how to pray and prayer rugs loaned to us from our Muslim neighbors on display. Volunteers were on hand to answer any questions visitors had about the prayer rugs or Islamic practices.

After introducing remarks were made by project director Kirsten Cappy, Reza Jalali, director of Multicultural Affairs at the University of Southern Maine and author of the children’s book Moon Watchers took the stage to talk about Ramadan and practicing the Islamic faith in Maine. He touched on his own experiences coming to Portland and the growth he has seen in the Muslim community in the almost thirty years he has made this city his home. Jalali also spoke about the five pillars of Islam and the celebration of Ramadan as part of an “Islam 101” education for those in the audience who were unfamiliar with the practices. Attendees were given a chance to ask questions, some of which were answered from Muslim teenagers who were in the audience.

Pious Ali of Maine Interfaith Alliance then hosted a panel discussion with Reza Jalali, Anne Sibley O’Brien, Maria Padian, author of Out of Nowhere, and Padian’s cultural adviser, a Somali young man named Shobow Saban. The topic of the panel was the process of cross-cultural collaboration on the titles Moon Watchers and Out of Nowhere. Pious guided the panelists in conversations about how each team came to work together and the many conversations that took place between author and cultural adviser. O’Brien and Padian shared what they learned about Islamic practices and the Iranian/Somali culture during their research. The panel concluded with the audience answering the question “What is one thing you will take away from this evening?” The remarks made were wonderful; many commented on a greater understanding of the religion and Ramadan and one attendee expressed a reawakened desire for connection across faith. Another said it was “wonderful to be here with so many neighbors.”

At 8:15, it was time to break the fast as a community. As Jalali described during his talk on Islamic practices, Muslims fast from sun rise until sunset during the month of Ramadan, as a time to practice self-discipline and to increase awareness of and compassion for the poor and hungry. A man from the Muslim community gave the call to prayer and signaled the time to break the fast. Hungry attendees of all faiths gathered to taste food from Tandoor Bread and Restaurant including Iraqi flat bread, hummus, falafel, lentil soup, white bean soup and mountains of rice perfumed with saffron, raisins and almonds. For a sweet end to the meal, there was rice pudding and baklava.

Our thanks go to the many volunteers, Portland Public Library staff, Reza Jalali and Pious Ali, who dedicated their time and expertise to make this event a wonderful success. We also thank the family at Tandoor Bread and Restaurant for providing such excellent food to break the fast and which certainly was enjoyed by all who joined. 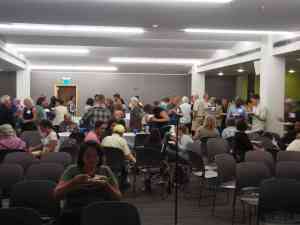 Guests of all faiths were invited to break the fast at 8:15